In 1960, Leonard Cohen bought a $1,500 house on a greek island popular among greek’s and expats alike, named Hydra Island. From the book Various Positions: A Life of Leonard Cohen, Cohen describes his house on Hydra to his mother in Montreal:

It has a huge terrace with a view of dramatic mountain and shining white houses. The rooms are large and cool with deep windows set in thick walls. I suppose it’s about 200 years old and many generations of sea-.men must have lived here. I will do a little work on it every year and in a few years it will be a mansion… I live on a hill and life has been going on here exactly the same for hundreds of years. All through the day you hear the calls of the street vendors and they are really rather musical… I get up around 7 generally and work till about noon. Early morning is coolest and therefore best, but I love the heat anyhow, especially when the Aegean Sea is 10 minutes from my door.

Coming to Hydra in late December, well into the offseason, you could repeat Cohen’s words and they would still ring true today. On Hydra, you’ll see locals going about their daily work and activities, and you won’t find any motorized vehicles on the island except for the odd farm or utility vehicle – the islanders walk or use donkeys to get around. Local restaurants are open, and you can find most of the expensive touristy restaurants along the harbour still open for business.

I spent three days exploring the island, but my first order of business was a pilgrimage to Leonard Cohen’s house. His family still owns and uses it, and I knew it’s general vicinity. So, from the right side of the harbour I set out on to the narrow streets and up the hill to find it. After walking for 10 minutes, I knew I was close, and I came across a market that looked like it had been there for at least 50 years. I had read about “The Four Corners Supermarket” near Cohen’s house, and surely this was it. I snooped around the area before finally entering this small market. I saw a woman and a male customer speaking in Greek, and I casually waited in line to buy a bottle of coke.

I met Maria Kodopithari, who owns the market along with her husband, and after I paid for my coke, I asked her about Leonard Cohen. “I knew Leonard very well”, she said. “He used to come and buy groceries here all of the time, but that was 25 years ago!”. I asked her if she could help me find Leonard Cohen’s house, and she gracefully obliged. She walked me out of the store, and down a few blocks and kindly directed me to his house. That was a very nice and warm gesture, and I thanked her, and she head back to her store to attend to other customers.

Hydra island is full of Cohen’s old haunts, including, The Roloi Cafe (formerly known as Kafenion O Katsikas) where Cohen and his friends spent meany evenings, and it’s said that Cohen did his first live (venue) performance in Hydra there. Inside the venue many old photographs of Cohen and his friends are hanging on the walls. Bill’s Bar was made popular with the song “Night Comes On” and is nestled inside of the Bratsera Hotel.

I checked out some of these establishments, but I had bigger plans. I wanted to see the rest of Hydra, so I set out on foot, and over three sunny December days, I saw and lived as much as Hydra as possible (find link at the bottom to my follow up post about Hydra Island). 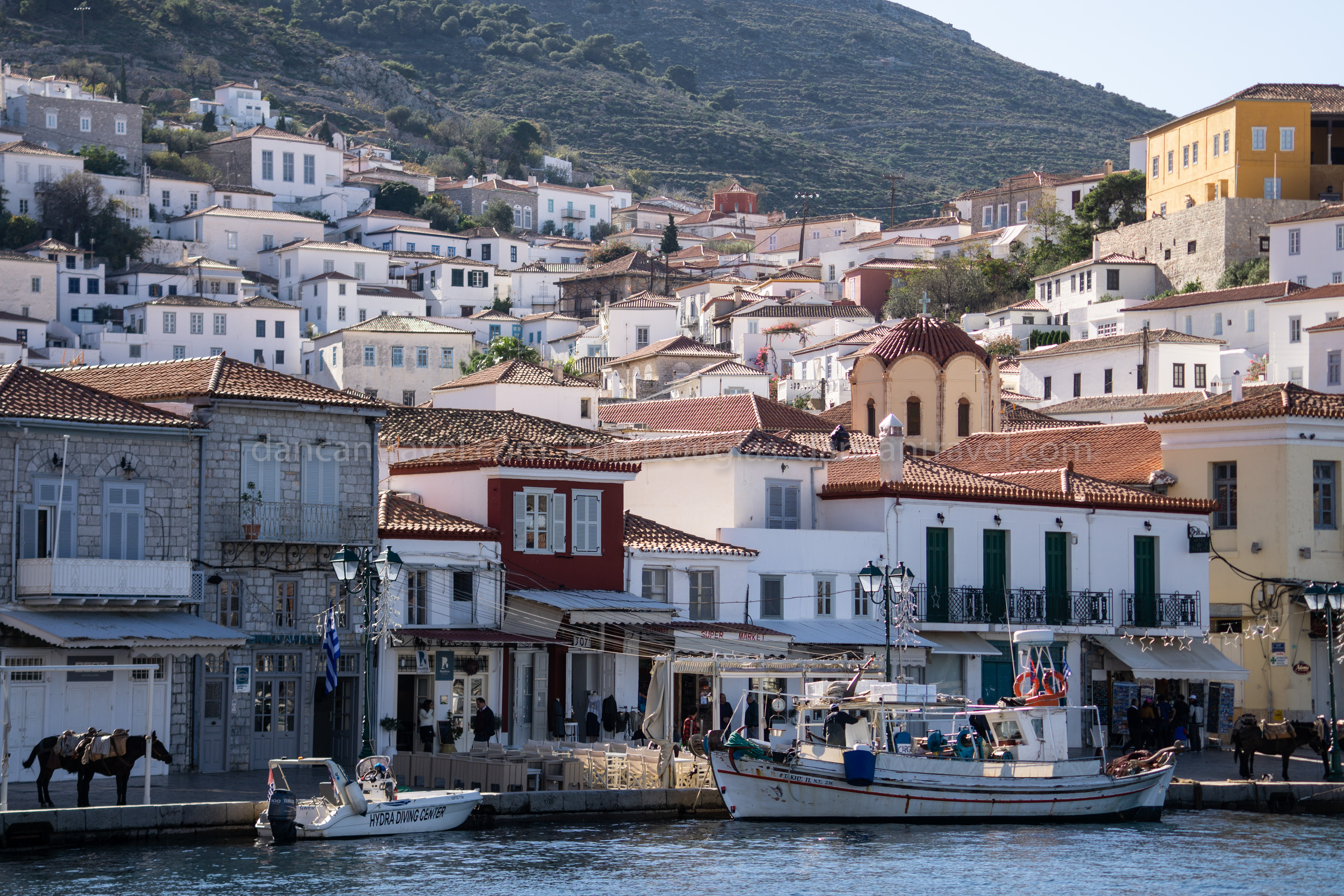 Upon first arrival to Hydra, you’re treated to incredible views of Hydra Town from the harbour 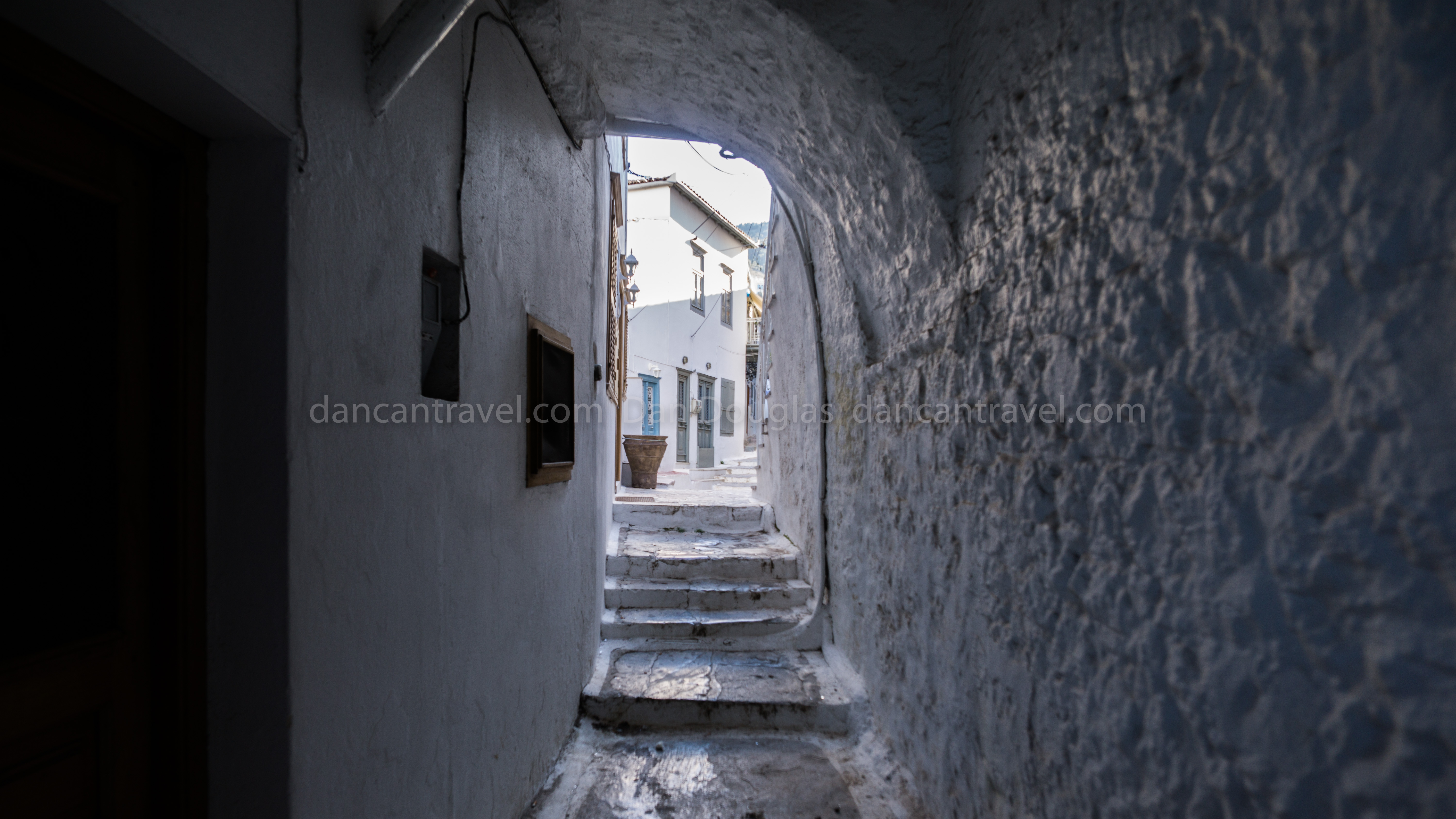 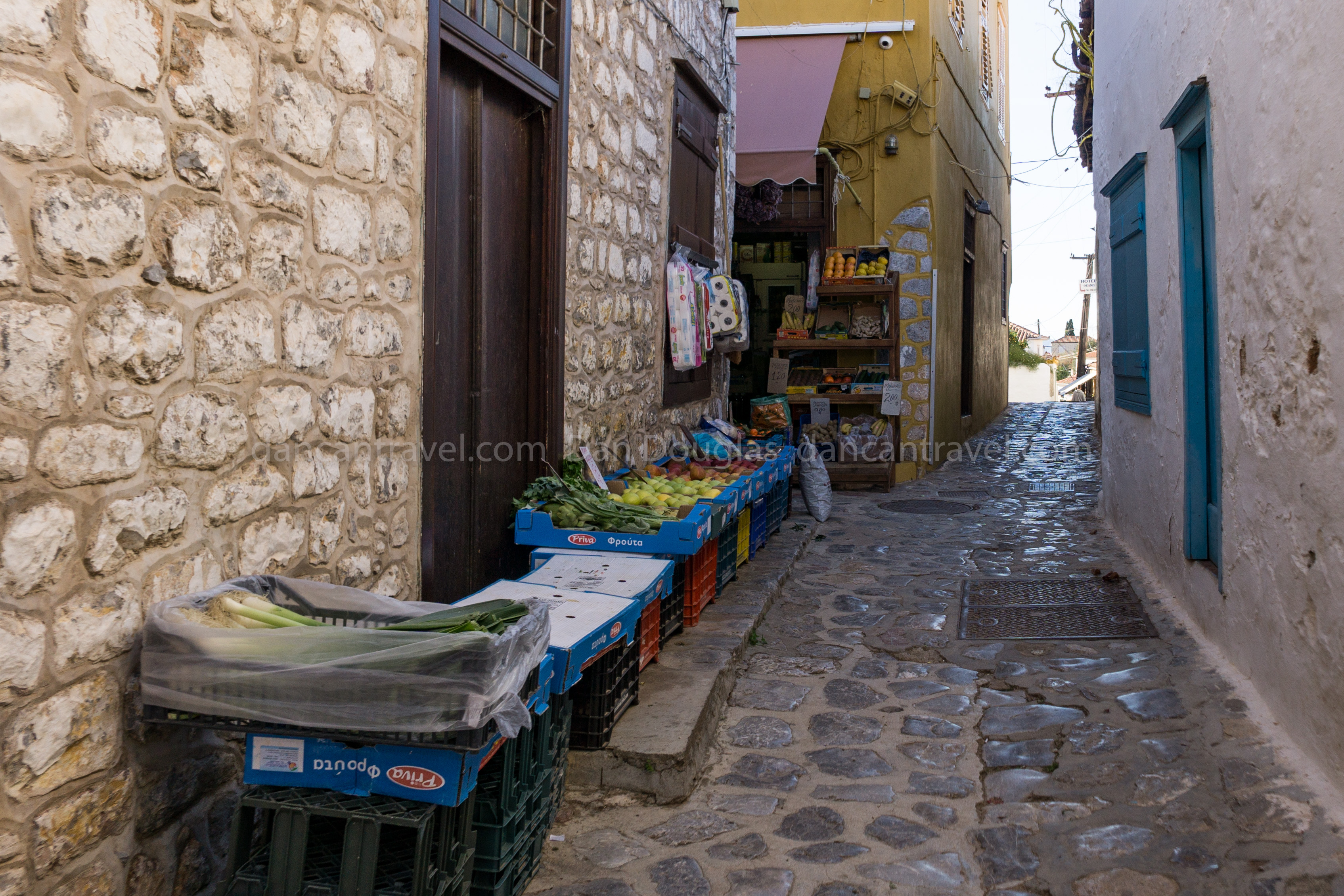 The Four Corners Supermarket just around the corner from Leonard Cohen’s house.  Regularly frequented by Cohen and his family. 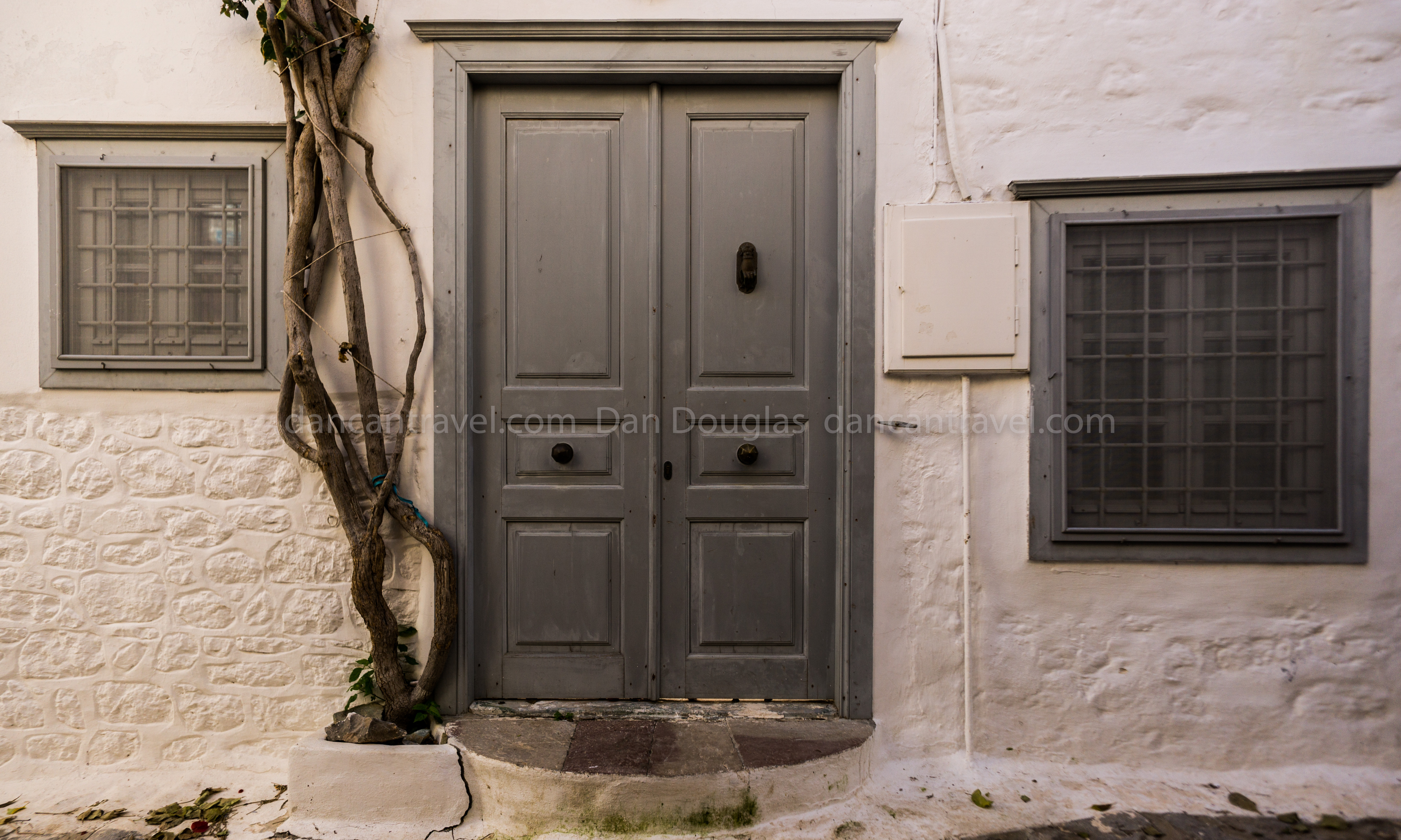 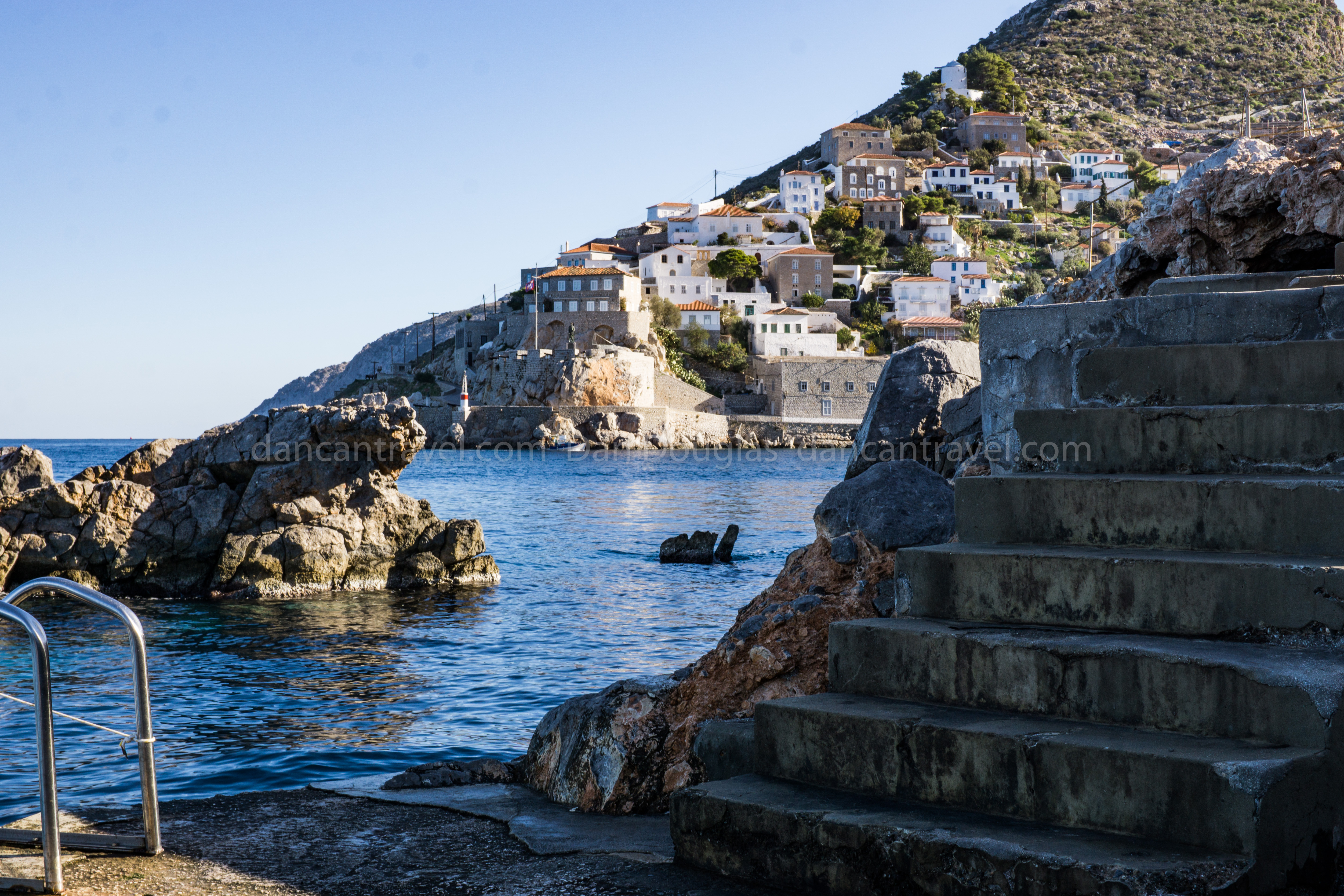 A popular swimming and diving spot in Hydra where Cohen, his family, and friends swam regularly.  Many photographs from the 1960’s can be found of Cohen and his family in this very spot. On a sunny December morning, I found the harbour waters cold, but swimmable. 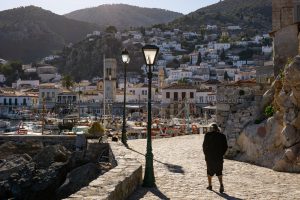 You can find my full photo journey on Hydra island at Hydra Island, A Photo Journey.